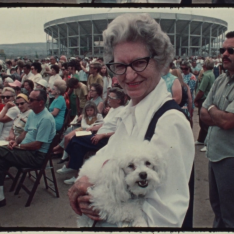 2020
On August 18, 1971, First Lady Pat Nixon declared a stretch of land along the US-Mexico border a “Friendship Park,” willing two countries toward a common future. Decades later, this spirited inauguration hangs above the meeting place like a specter, charged by the border’s harsh realities. Vibrant digitized color film from the Richard Nixon Presidential Library along with stirring musical and oral performances from the inaugural event clash against the present, as TOO LONG HERE ponders the implications of an empty promise.

Writeup: 7 Films to See at Prismatic Ground “More or less a seven-minute short film looking at the day that former First Lady Pat Nixon inaugurated a stretch of land along the US-Mexico border as “Friendship Park,” Too Long Here is director Emily Packer’s recontextualizing this event opposite the increasing racism and xenophobia that has ultimately culminated with not just former president Donald Trump, but his “liberal” replacement Joe Biden potentially continuing the building of the disastrous border wall. A soul-crushing exploration of America’s failed promise and increasing descent into nationalism is the real focus here, with Packer using lushly restored footage from the inauguration set against what the viewer is keenly aware of as the future for this relationship. In just seven minutes Packer stacks her film with fascinating moments from that day in history, and culminates with an absolute emotional gut punch of a final moment. A fascinating, deeply important work.”

Other Press: The San Diego Union-Tribune